ROBE ON TOUR WITH PHOEBE BRIDGERS

This article originally appeared in PLSN

Intelligent, enigmatic, and hugely talented, the music of Phoebe Bridgers has been captivating an ever-growing fanbase since her first album release in 2017, with Lighting Designer Spike Kienholz Inglis of Spike Design lucky enough to have been lighting the artist since those early days.

Fame and acclaim have arrived at a fast-and-furious pace for the L.A.-based singer / songwriter, who released her second album, “Punisher,” in 2020. With live events and touring disrupted at the time due to the p-word, she is now mid-way through a 2022 world tour which started in the U.S., before moving to Europe for a festival blast through the summer, and ultimately culminating in a UK headliner tour.

For the U.S .leg of the tour, Inglis specified a full Robe moving light rig – with 24 MegaPointes, 24  Spiiders, 16 Tetra1s and six FORTES – all supplied by Gateway Studios & Production Services of St Louis. 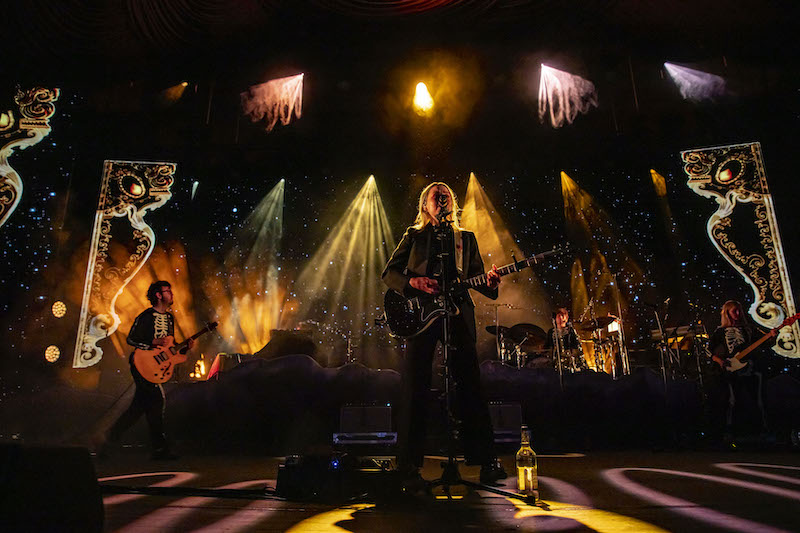 Inglis first encountered Robe’s products while touring Europe in 2014 and has been a big brand advocate ever since. He is delighted that Robe has become so successful and prolific in the U.S., and most of his tours for the last five or six years have featured either Pointes or MegaPointes. “They are simply so versatile, and even a few can go a really long way with a bit of imagination!” he commented on both fixtures.

For the Phoebe Bridgers design, five of the FORTES were positioned on the deck with the sixth used as a center rear key spot flown on a mid-stage truss. Inglis describes Robe’s current most powerful moving light as “fantastic” and appreciates the streamlined size for the brightness and power they emit. Their “lean and mean” physical appearance, “exceptional” gobo selection and even color mixing are all features he appreciates. He is also particularly fond of the four-color selection on the color wheel, which can be focused into a beautiful rainbow look from a single fixture.

Of the 24 MegaPointes, 16 were in the air and eight on the floor, serving as the primary workhorses of the rig. “They look great and are extremely reliable,” he noted.

Eight Spiiders were on floor towers as sidelight, used heavily in place of traditional front lighting, with the rest mostly positioned as flown backlight. He likes the deep colors of the fixture, and also enjoys the option of the flower effect for subtle moments. The Tetra1 bars were positioned along the floor behind the row of performance risers and were used for creating beautiful kinetic flowing effects. 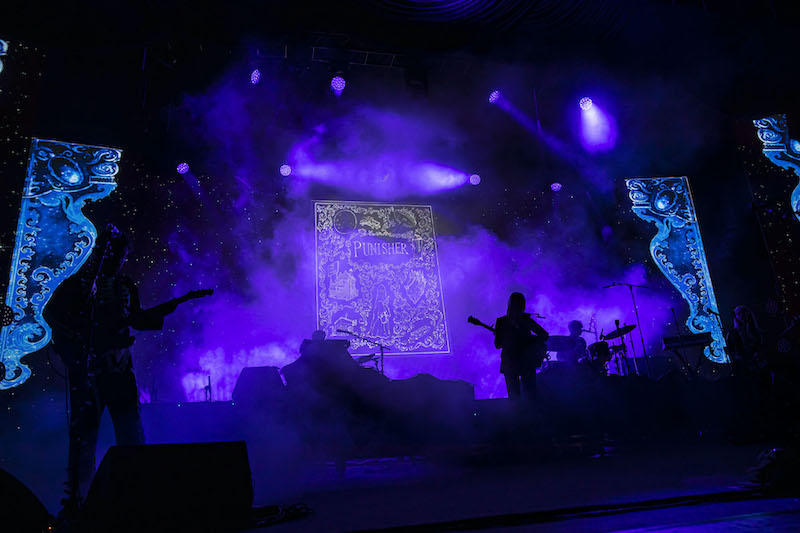 Inglis observed that all the Robe products are particularly great fixtures for his touring lighting technicians. They have the most logical and easy to navigate control panels in the industry, and are expediently sized and lightweight considering all the flexibility they bring to the table.

In moving to the UK and Europe for a run that largely consisted of festivals, the choice was made to only travel with a floor package, rather than the entire flown rig as well. While attempts were made to secure the exact same Robe fixtures for the fixtures they would carry, some concessions had to be made as per availability. That said, they were able to obtain the 8 Robe Spiiders and 8 MegaPointes, which were supplemented with some other fixtures in place of the FORTES and Tetra1s. All fixtures were supplied by northwest London-based Colour Sound Experiment.

Inglis was delighted to rock up to the Liberty Stage at the Colours of Ostrava festival in the Czech Republic and discover that it was an all-Robe air rig, though was not surprised, as he had done his research and knew that the festival was taking place just down the road from the Robe headquarters. For all the European headline shows, best attempts were made to secure as close as possible to a rig that was used on the U.S. tour, and some shows, such as their Berlin show at Tempodrom, the local provider was able to replicate the all-Robe selection. For the final UK headline shows in Manchester and London, Liverpool-based rental company Adlib supplied the flown rig for all shows including the upstage FORTE, and the 16 over-stage MegaPointes.

The show was a careful blend of lighting and video, all cued from Inglis’s Avolites Diamond 9 330 console in tandem with a disguise d3 media server rack. Inglis was also responsible for the design and creation of all the playback video content. Every song from the “Punisher” album was complimented by a corresponding page from a pop-up book. Each pop-up “spread” was based on artwork drawn by Chris Riddell, an English illustrator, author of children’s books, and political cartoonist for The Observer. Riddell also illustrated the artwork in the liner notes of the “Punisher” album. 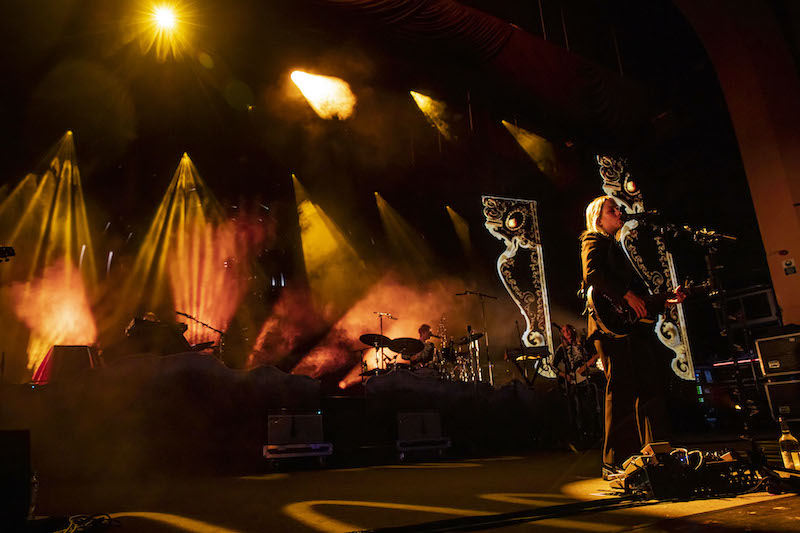 “The music and lyrics lend themselves to great imagery,” Inglis explained, and collectively he, Bridgers, and Riddell all collaborated on what general concept would be illustrated for each song in pop-up book form, to then provide a backdrop to the scene displayed on a primary upstage LED video wall. Inglis felt that it had to be a real, tangible, pop-up book that would be created and filmed in order to match the quality of the music. To realize this, he had to find a paper engineer, a rare and highly niche specialist in the art of folding paper into unique configurations. After some weeks of searching, he was put in touch with Renee Jablow, who worked along with Inglis and Riddell to develop the complex workflow needed. Ultimately, each illustration was formed into a physical pop-up page – as if they were making an actual book, which was then subsequently filmed by Inglis and L.A.-based production company, Sound and Vision Co.

These pop-up book video backdrops are combined with some additional digital animations in the live show – twinkling stars, fireworks – which come together to create a huge impact. There are also some additional video approaches used for songs not from the “Punisher” record, including one of a filmed diorama, which help break up the show and provide an element of variety.

Inglis enjoys working with Phoebe Bridgers for many reasons. She likes a lot of shadows, darkness, and mood onstage. He is very experienced at creating that ambience with a small number of fixtures, but this tour stepped up with production values and a much larger lighting rig. That, in turn, offered additional flexibility and dynamics, while being faithful to the base aesthetic. He has a good deal of creative freedom and is consistently able to experiment with different ideas. “It’s interesting, exciting, and great fun to work on her shows,” he concludes, adding that she is a great communicator who has a fantastic rapport with audiences and is fully aware of how lighting and visuals contribute to that delicate equation.

The tour is scheduled to continue touring Latin America in the fall, and on to early 2023, when they will visit Australia as part of the touring Laneway Festival.